If sports translate well to video games because they are already games, then pro wrestling doesn’t because it doesn’t make any sense at all.

Developers try to make wrestling video games easy to pick up and play, and usually they’re so basic that they get repetitive and boring after a while.

Styles make fights, even pretend fights. But in wrestling video games, wrestlers are usually all the same. They might do different moves, but you use the same strategies and press the same buttons. Video game matches lack the variety of actual wrestling matches.

Despite that, I’ve played lots of wrestling games over the years, and you probably have too. So here it goes: an abridged history of wrestling video games and an analysis of why they suck. And trust me, the games I’m skipping over are even worse than these ones (with notable exceptions being the WWE games on Xbox and GameCube, which are similar to games listed here).

Nintendo
Released in 1987 by Nintendo

People claim to be fond of this old game with its generic wrestlers and simple graphics. Grapples are automatic and whoever times their button press better does one of a few moves. It’s repetitive and basic as hell, despite the fact that it depicts running off the ropes and leaping off the turnbuckles better than the other 8-bit games.

These games are easily the worst on this list. Every grapple is literally a button-mashing contest, and other mechanics like tossing opponents out of the ring are needlessly tricky. Each version added different wrestlers with more moves and even allowed six wrestlers on the screen at once, but you’ve got to really love your early 90’s WWF to punish your thumbs with this nonsense. I’m in the minority on this one, but I kinda like these games. They use Mortal Kombat-style digitized graphics and commands like “down-right-square” to shoot projectiles. Matches are quick and use the 2/3 format that’s standard in fighting games. As you go along, you advance to 1-on-2 and 1-on-3 matches. The action is fast and outlandish, with ridiculous visuals and sound. 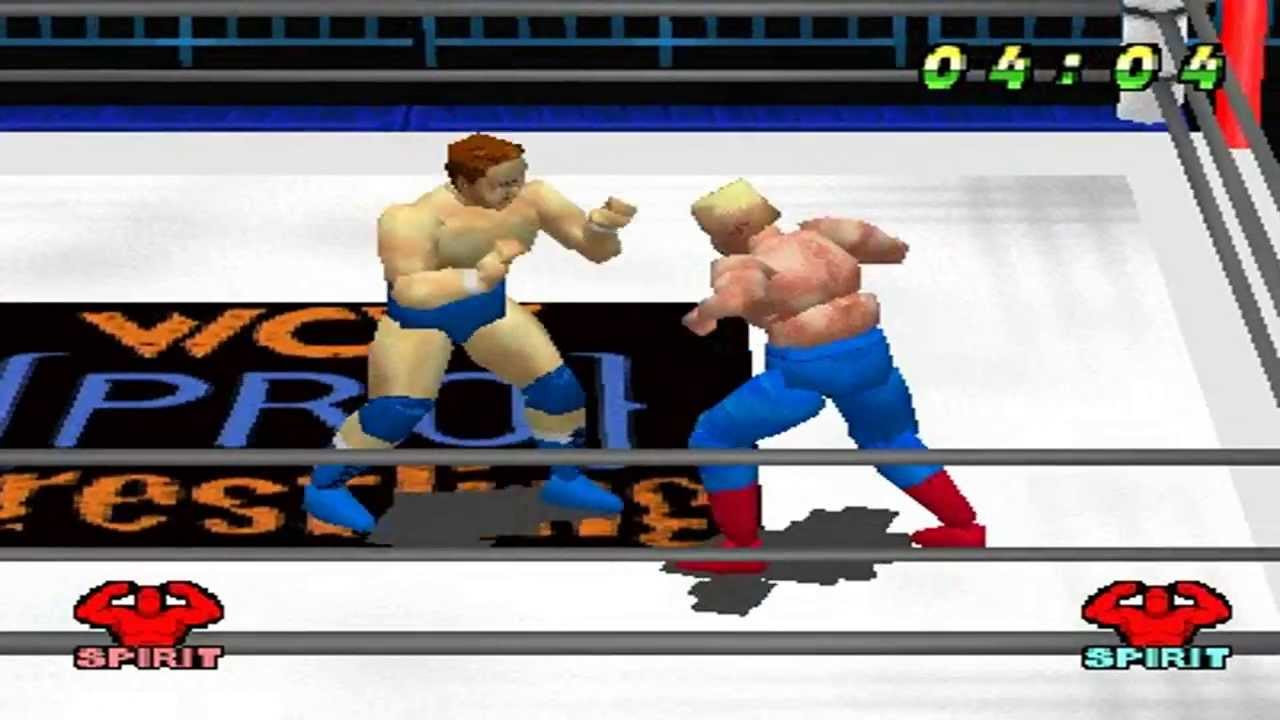 WCW vs. The World

Playstation 1
Released in 1996 by THQ

This game introduced THQ’s wrestling gameplay to an American audience. The key innovation is that whoever initiates the grapple usually does the move, and there are quick grapples for little moves and slow grapples for big moves. Also you build up a momentum meter with moves and taunts before being able to hit your finishing move. These elements have stayed with wrestling games up to today. Unfortunately the final product is underwhelming, with clunky movement, ugly graphics, a lack of personality, and only 1-on-1 matches.

While THQ was getting a grip on fun wrestling gameplay, the geniuses over at Acclaim were complicating it. These games require Mortal Kombat-style button combinations to do moves, which can seem awkward in a 3D game. I kinda like the idea — it requires skill, and it’s not just one grapple after another — but the action is slow and sloppy. Matches are long and repetitive. Not even audio clips of your favorite stars talking trash can spice up gameplay this boring. Most gamers agree that these are the most fun wrestling games ever. The quick-and-slow grapple system is well crafted, with reversals, ducking, blocking, running, and great 4-player action. Most important, the action is crisp and snappy. Wrestlers move with a rhythm that’s easy to learn, making it clear how you should play.

Each version has slight improvements and added features. The WWF versions have the best Royal Rumble action anywhere. In the long run, however, even these gems fall into the same traps are other wrestling games; they’re repetitive and reward cheap tactics.

PlayStation 1
Released in 2000 by THQ

This is kinda where things started to go downhill, but you couldn’t notice yet, kinda like a drug that feels great but will ruin you in the end. These use a stripped down version of the THQ gameplay, much faster and simpler. The action is meant to look smooth, but it takes away the skillful timing elements from the N64 games. By making the action look better, it actually feels worse. It also debuted an annoying visual addition, the constantly flashing camera bulbs in the crowd. Sigh.

PlayStation 2
Released in 2003 by THQ

Building on the PS1 Smackdowns, these continue the “looks better but feels worse” idea. The grappling feels looser and more of a guessing game, and the action can get really frantic with up to six wrestlers on screen. With its fast action and deep features, Here Comes The Pain still gets praise today, but I’m not a big fan.

PlayStation 2
Released in 2005 by THQ

This stretch of games feels like the last, but more under control. Guys “sell” the moves much more, and it’s common for one guy to dominate the other for a while. While that’s closer to the flow of actual pro wrestling, it makes for some frustrating gameplay. The animations are finessed further, making things even tougher to handle, and there are more mini-games for things like getting out of submission holds or escaping a steel cage.

PlayStation 2
Released in 2007 by Spike

You can customize wrestlers visually to great detail, but more important, the AI options are immense. If you’re willing to trudge through the menus, you can tweak so many wrestler tendencies, how often they strike or grapple, how often they whip opponents to the ropes, when they pull out their strongest moves, when they go for pins, when they tag out in tag matches, what special abilities they have, what body parts are most vulnerable to damage, and so much more. It’s impressive and interesting stuff.

The big problem is that playing the game is still very repetitive. Every grapple comes down to timing your button press at the right moment. If your timing is slightly better than your opponent’s, you’ll win every grapple and every match. On the bright side, I like that there’s not a lot of button-mashing; reversals and escaping holds happen automatically. And eight wrestlers can be on screen at once. If they could just add some more skill-based mechanics, the gameplay would have more lasting power.

This one-off diversion from THQ’s series appeals to older fans with a roster of late 80s/early 90s wrestlers and a simplified control scheme. It has an interesting mode of highly preset matches against the CPU, where you reenact particular spots from classic matches with the help of onscreen text. It all feels overly basic in the long run, but it has some charm.

Another diversion from the ongoing WWE series, this arcade-style title has short matches and dazzling superhuman moves. The basics of the gameplay are still the same, but finally THQ gives wrestlers substantial stylistic differences. Lightweight flyers can bounce in the air and catch opponents with a slick move on the way down, brawlers connect on punches more often, and traditional grapplers have an easier time throwing opponents to the mat. Even so, I got tired of it pretty fast. The lack of a Royal Rumble and traditional tag team matches is a bit surprising for a 2011 release. 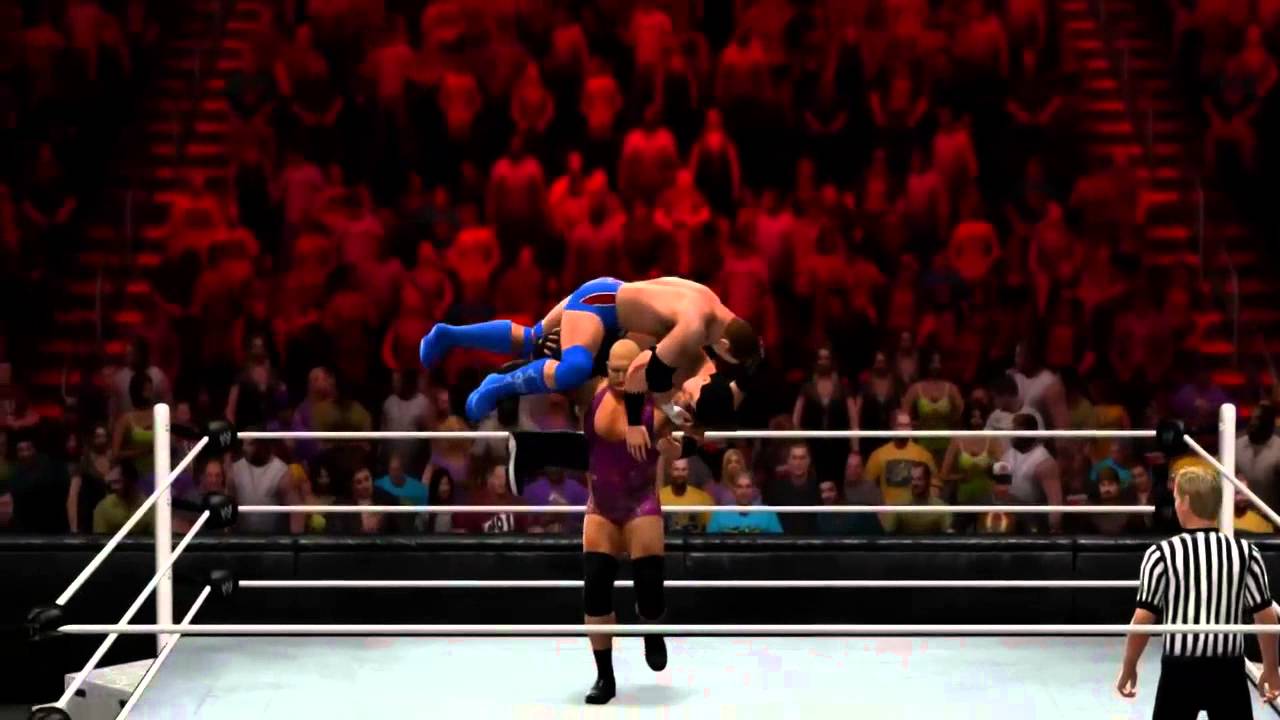 All the while, THQ’s trademark yearly series trudges along (although the license was bought by 2K as THQ filed bankruptcy). WWE 2K14, the last one before PS4 and Xbox One installments started, is known to have improved match flow and a more natural CPU opponent. It’s got nice graphics, elaborate presentation, and a deep feature set … but still plagued with the same clunky gameplay. Like Legends of Wrestlemania, it has a mode dedicating to recreating classic moments, full of detailed on-screen help text. Having paid only $8 for it, I consider it a worthwhile purchase, but I find it a little dumbfounding that in the 30 or so years since NES wrestling games were all the rage, this is best the genre has to offer.